Alice B (Alice Botéus) is a Swedish singer song-writer from Gothenburg. In 2005 she started writing poems and set them to music. Her breakthrough came with the release of her first album Alice B in 2012. Her second album Så Unga was released in 2016. Her latest album Kanske was released only a few weeks ago (March 15, 2019).

Alice B sings in Swedish and her indie pop music is characterised by lyrics that are very poetically portraying life in Gothenburg and the agony of trying finding true love. 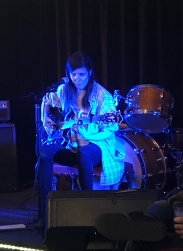 The performance today is a 30 min intimate set featuring her and her guitar. She sings songs exclusively from her new album and in between the songs she chats shyly with the small audience.

The explains that the song I met Her in a Bar was inspired by the serial killer murder trial of Aileen Wuornos, where the murderer’s girlfriend helped the police and tricked her into confessing her crimes.

My favourite song from today’s set, however, was Blick, which is a moving song about finding love.

I have tried something for an eternity. Trying to love someone sincerely After all, after all