An obvious activity prior to attending a concert is getting hold of a ticket. Buying tickets must be one of the most distressing things ever; you are excited about the upcoming show but also terrified you won’t get hold of a ticket. This entry is about the thrill and the agony of buying concert tickets.

Grab your ticket and your suitcase. Thunder’s rolling down the tracks

In 1992 I bought tickets for my first Bruce Springsteen show. Buying tickets back then wasn’t the same as it is today. There was no internet and no Ticketmaster in the ancient days. You had to either spend hours on telephone, first dialling over and over again because all you could get was a busy tone and then hours in a telephone queue or to stand in a physical line at the box office.

To me the best way to get my desired ticket was to queue outside the box office. I’ve always been “the good girl”, so skipping school to queue for tickets was a big step for me. I felt extremely guilty and since the box office was situated right outside my school I was terrified one of my teachers would spot me. Me and my friends knew there would be lots of people waiting in that line, so we started queuing a day ahead and were prepared for an overnight stay to get those tickets. When arriving to the box office early the morning before the release of the tickets the queue was already half way around the building. We had brought camping chairs to sit on, blankets to stay warm during the night and something to eat and drink. Waiting in line to buy tickets is not much different from pit queuing. It’s actually a quite fun expericence. You meet other fans, you talk, you sing and listen to music together. I got my ticket and you can read more about what my first show was like here.

Buying tickets online is what we’re used to nowadays and that can be an overwhelming process for those who have never done it before. There are hundreds of different websites that sell tickets and you want to purchase your tickets directly from the official seller (you do not want to end up buying tickets on the secondary market and pay way much more than face value). From the artists official websites you find the tour schedule and links to the official ticket sellers. Ticketmaster is one of the largest, but lately other official tickets seller have been more common.

Finding the right ticket seller is not the only obstacle you have to overcome to get hold of a ticket. Tickets sometimes get reserved by credit card companies and also by the artist’s fan club and that leaves less tickets to the “normal” buyer. Sometimes you find out that you have access to one of the presales that preced the general sale and that is a huge stress release. 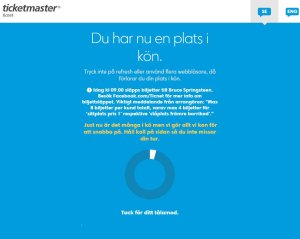 I’ll tell you what usually happens when buying Bruce Springsteen tickets in Sweden: you are (naturally) excited about the concert and you make a point of connecting to Ticketmaster as the tickets are about to go on sale and, immediately, you end up on hold – “You are now in a virtual queue, please don’t refresh or start another search in a new browser tab, or you’ll lose you place in the line” 🤦🏻‍♀️. After a while this message appears: “This pages does not mean that the site is down or that tickets are unavailable- we’re hard at work behind the scenes to get you there. Thanks for your patiens!”. Not down!? Yeah right! Everybody knows exactly what has happened – again!- the site has crashed due to the heavy demand and everything is chaos. In my mind I see people running around like giddy geese trying to patch things up.

“we’re hard at work behind the scenes”

Eventually, after waiting in the virtual queue for hours and reading on social media that all your friends already have their tickets (getting more and more stressed out), you get a message that the concert is sold out but that they’ve now released tickets for an extra concert (rest assured that the promotor, Live Nation, already has planned for an extra concert). Your patiens has paid off and it’s finally time for you to purchase your ticket. Phew!

I’ve actually learned that, a couple of hours later when the commotion has settled, you can connect to Ticketmaster again and find tickets to the show that was “sold out”. I’ve also learned from friends that are far more experienced ticket buyers that there is no such thing as a “sold out” concert. There will almost always be more tickets available later. It’s custom that there is a ticket drop closer to the show (when the organiser knows more about the size of the stage and practical details like that). There will also always be tickets available at face value on fans’ forums and also on the secondary market – beware of scalpers!

Lately there have been different intitiatives trying to prevent bots and scalpers from scooping up tickets. One is that you need to bring the identity card of the buyer to the gates to get in. One other method is the “verified fans system”, where fans register ahead of time and Ticketmaster analyses every registrant to make sure they are real people (not bots or scalpers) interested in going to the show. Those who are verified and selected receive a code that unlocks the opportunity to purchase tickets. Ticketmaster’s verified fans system has been widely and intensely discussed among Bruce Springsteen fans (it was introduced to Springsteen fans as the tickets to the Springsteen on Broadway-shows were about to be released). I won’t go too deep into that issue but my opinion is that I applaud every effort to try and stop bots and scalpers, which are a nuisance for every serious concert ticket buyers, but that the system might need to be adjusted and refined. The intent was, obvioulsy, not meant to offend fans but to try protect them from bots and scalpers.

My 2018 concert schedule, so far- (stay tuned for concert reviews):

3 thoughts on “Land of Hope and Dreams”