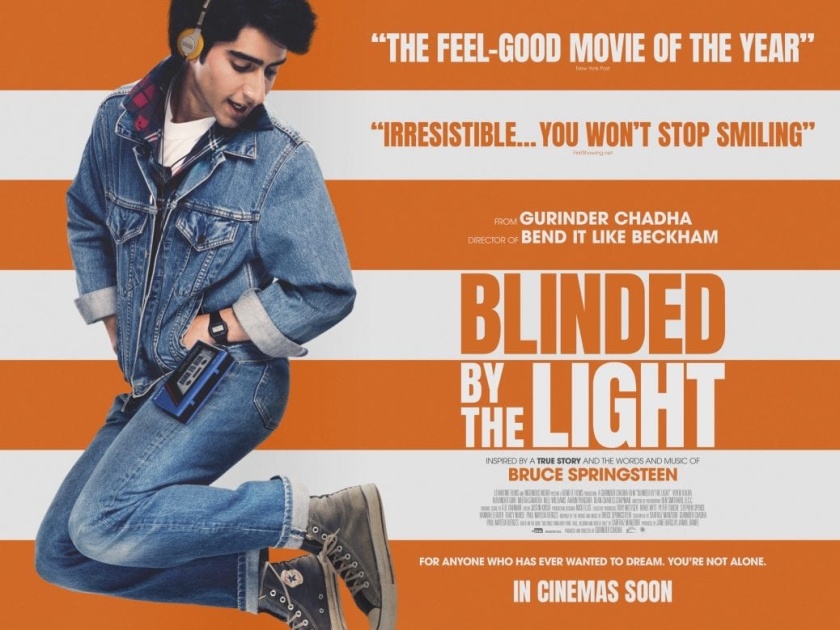 In the highly unlikely event that anyone may have missed what the film Blinded by the Light is about:

Blinded by the Light is a British comedy-drama film inspired by the life of journalist Sarfraz Manzoor’s acclaimed memoir Greetings from Bury Park: Race, Religion and Rock N’ Roll. Set in the town of Luton in 1978, the film tells the story of Javed, a British-Pakistani teenager whose life changes after he is introduced by his buddy Roops to the music of Bruce Springsteen.

The above description is how the film is presented officially, now to my personal comment:

Blinded by the Light is a feel-good, fact-based comedy, that I had the good fortune to catch on the ongoing Way Out West festival yesterday (9 August 2019). The Swedish premiere is otherwise scheduled to September 27th.

It’s not a film on Bruce Springsteen, in fact you don’t even have to be into Bruce Springsteen at all to appreciate it (even if it helps). It is a film on the conflict between tradition and following your dreams. It’s on the tension between parents and teens and the importance of empathy. Conclusively the film is about working hard and overcoming obstacles to reach your goals and realise the price you have to pay to get there.

Collaterally, is about the magical impact music can have on your life (I know many Springsteen fans who can witness that). If you ever heard ANY music that made your heart race and that you felt has affected your life, you will appreciate this film.

Apart from that, it has good humour, great acting and it depicts the time in the 80s well.

As you probably can tell, I was totally taken by Blinded by the Light. I was so moved I decided to deviate from my original plan, which was to see both Blinded by the Light and Bohemian Rhapsody after one another, to let the first one sink in before moving on to the venue of the Way Out West music festival. Read more about my festival experience here.

One Chance to See the World
Set Lusting Bruce: The Bruce Springsteen Podcast

Got a song to sing to keep me out of the cold // and I'll meet you further on up the road.