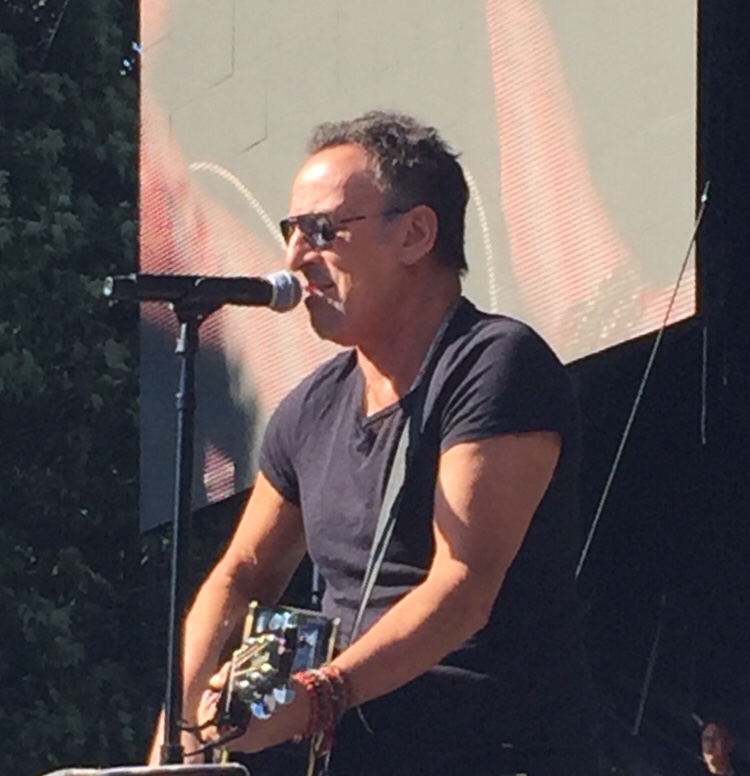 A couple of days before Bruce Springsteen and the E Street Band’s show in Frognerparken, Oslo (July 28th, 2016), I managed to get hold of a ticket. A friend of a friend had a spare one and he sold it to me – face value. I had also managed to find somewhere to spend the night so I hopped on the bus from Gothenburg to Oslo (a 3h trip). 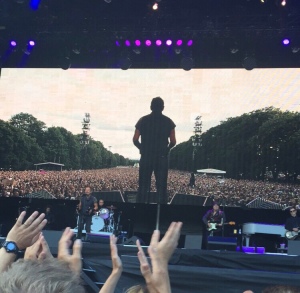 Frognerparken is not a typical concert venue. It’s a large field situated in a beautiful park. There are no stands, just a lush avenue surrounded by trees.

After arriving in Oslo I made my way to the venue as soon as possible to get a number for the pit queue. While waiting for the concert I bumped into Stephanie (a Twitter friend who already in 2013 had a dance and a selfie with the Boss), and a very nice couple from Sweden, who also had attended the shows in Gothenburg and we ended up exchanging photos when we found out that we had unknowingly photographed each other.

Right before the support act, Bruce Springsteen suddenly turned up on stage wearing a pair of sunglasses and an acoustic guitar. He played Working on the Highway and checked out the request signs before returning backstage.

The song Working on the Highway has always been a bit controversial. On the surface it’s a fun upbeat song that makes you want to dance – a real crowd-pleaser. It it’s about a man who works his butt off all day on the highway, dreaming of a better life, of meeting the right girl and settling down. When you look closely on the lyrics you also find that this song actually is about statutory rape. The girl he fancies is not the age of consent. They run away but get caught and the narrator ends up in jail – his punishment? To work on the highway, only this time on a chain gang. Pretty ironic!

Anyway, I think it’s a great song and it was my first pre-show ever. Can’t complain on the main set that followed either. The entire The River was played AND some more – a great night!

Setlist: Pre-show: Working on the Highway (solo acoustic) Main set: Meet me in the City, The Ties That Bind, Sherry Darling, Jackson Cage, Two Hearts, Independence Day, Hungry Heart, Out in the Street, Crush on You, You Can Look (But You Better Not Touch), I Wanna Marry You, the River, Point Blank, Cadillac Ranch, I’m a Rocker, Fade Away, Stolen Car, Ramrod, The Price You Pay, Drive All Night, Wreck on the Highway, Badlands, the Promised Land, Lonesome Day, Wrecking Ball, Because the Night, the Rising, Land of Hope and Dreams, Born in the USA, Born to Run, Dancing in the Dark, Tenth Avenue Freeze-Out, Shout, Bobby Jean Encore: This Hard Land (solo acoustic)

🤨😷
Lovely evening for some 🥏+⛳️
Happy Friday! Schönen Freitag!
Happy Friday!
#göteborg #gothenburg #enkaffepådet #unddazueinenkaffee
What a lovely day! ☀️❄️
One year ago, I got myself some new ink. I’m very pleased with how it has healed. Thanks @matt.roscoetattoos @reinkarnationtattoos for a job well done!
#kvillebäcken #göteborg #homesweethome #sunrise
🙋🏻‍♀️#mirrorselfie