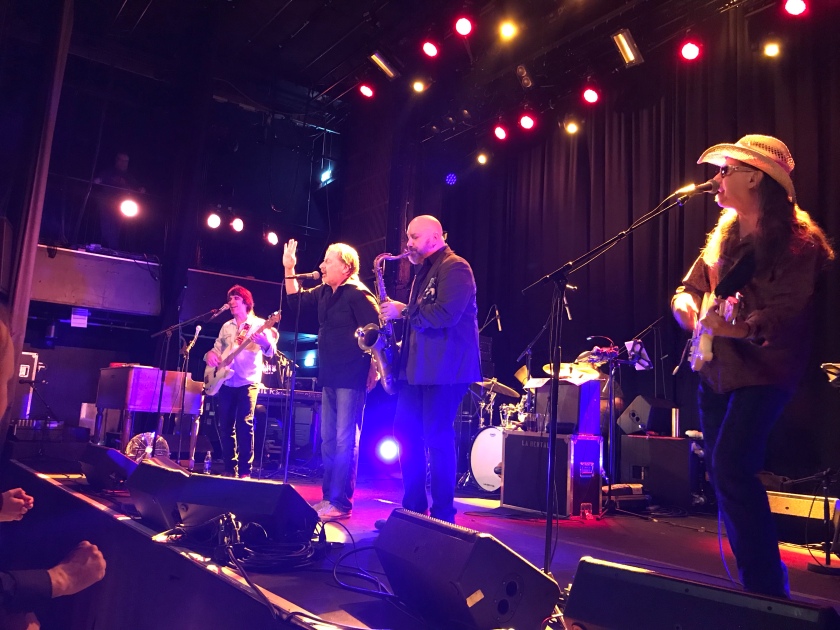 The rock club Pustervik in Gothenburg, Sweden has been sold out for a long time and as Southside Johnny and the Asbury Jukes enter the stage and open with All I Needed Was You, the spirit in the venue rises. I’m up front stage right. With only the rail between me and the stage I’m happy to know that I won’t have a tall guy wearing a hat blocking my view tonight (why do tall guys wear hats and how come they usually end up in front of me in concerts?).

Southside Johnny seems to be in a really good mood. He jokes with his band members and the audience. The venue is small and intimite and that makes it easy for him to have a conversation with the spectators.

A guy standing right behind me yells out a request, that gets played and then one more (!). Happy as a clam he bounces up and down fistpumping. A steamy jazzy version of The Fever is accompanied by a long narrative. Later we happily join in when Southside leads us in a call-and-response part on Talk To Me.  The soft and heartfelt Hearts of Stone is also a request from the audience and Glenn Alexander’s guitar solo is magnificent.

Talk to me— until the night is over

This is the first time I’ve seen Southside Johnny and The Asbury Jukes live, their music, however, has been on rotation in my playlist since I bought my first album, “Better Days”, in 1991.

Southside sounds great like before, his voice perhaps a bit more gritty. Singer/keyboard player, Jeff Kazee’s voice is smooth as silk and the two of them complement each other. The performance of the band is very relaxed and playful. The minor errors they make are soon forgotten and I must say the show met my high expectations and more- an excellent night of rock ‘n’ roll! I can’t think of a better way to spend a Thursday evening.

Southside Johnny & The Asbury Jukes started their career in the mid 70s and they play a typically ‘Jersey Shore Sound’- music. The genre, in short, is characterised by danceable melodies and R&B. Typical instruments are the accordion, the keyboard and characteristic brass- and horn sections.

The lyrics focus on the daily lives of people; relationships, personal struggle, life in general and a sense of being the underdog. Artists that helped create the ‘Jersey Shore Sound’ genre include Southside Johnny and the Asbury Jukes, Little Steven and the Disciples of soul and Bruce Springsteen and the E Street Band.

Both Little Steven and Bruce Springsteen have written songs for Southside Johnny and the Asbury Jukes (especially in the 70s). Songs like I don’t want to go home, Ride the night away and Love on the wrong side of town (by Little Steven) and Talk To Me, the Fever, Fade Away and Hearts of Stone (by Bruce Springsteen) are on the rotation during this tour and, as it turns out, Little Steven and the Desciples of Soul, also play some of these songs on their ongoing tour.