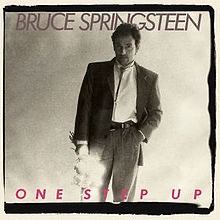 One Step Up off the album Tunnel of Love (1987) is a melancholy song that illustrates a troubled relationship/marriage. The song begins by describing a house with a broken furnace and a car that doesn’t start, both of which can be seen as metaphors for the relationship that isn’t working properly.

Already in the first stanza the singer expresses resignation: “We’ve given each other some hard lessons lately but we ain’t learnin’. We’re the same sad story that’s a fact. One step up and two steps back“. There’s no redemption as the couple’s been caught in a self destructive pattern: “It’s the same thing night on night who’s wrong baby who’s right. Another fight and I slam the door on another battle in our dirty little war“. Other metaphors in the song; a bird that won’t sing and church bells that won’t ring for a new bride-to-be, are enhancing the anguish the protagonist is experiencing.

Finally, he finds himself at a bar wondering whether to hook up with another woman there, while remembering a dream he had the night before about dancing with his wife.

The arrangement for the song is pretty stripped. Springsteen plays every instrument on the track himself (guitar, bass, mandolin, harmonica, keyboards and percussion) and his lead vocals are supported by a haunting echo provided by Patti Scialfa.

To me, the lyrics to this song aren’t only about relationships gone bad, but also about bad karma that sometimes takes a swing at you. You fix one thing and two more break, like the case with my bad shoulder.

If you follow my blog you know that I, in the beginning of 2019, fell and hurt my left shoulder during kickboxing practise and that I, on 1 March, had to undergo surgery to attach the torn tendons. It’s been a while now (five months) since I’ve posted any update on the progress (read my old updates here). I stated then that my new goal was to be back to full strength and in training by the end of the year. However, things have happened since then.

About a month ago I was authorised to start using heavier weights and barbells, and I did. Regrettably, after only a couple of sets I started to feel a pain in my right (!) shoulder so I decided to stay away from training for two weeks, but instead of going away the pain got worse. My physiotherapist says that I’ve overused my muscles and that it is necessary for me to get well in that shoulder before continuing with the rehabilitation of the other one. A rehabilitation that will take at least one year from when I was operated on.

One step up and two steps back 😒

One thought on “One Step Up”